The same question is on every cryptocurrency and Bitcoin investor’s mind – when will Bitcoin hit the $100,000 mark? It’s not an easy question to answer, and many top crypto investors have different opinions.

Bitcoin is the top dog in the crypto world and has surged wildly over the past few years. No other cryptocurrency is as hot and trendy as Bitcoin.

Even though it is viewed as a rather volatile coin, it has enormous value and future predictions are frequently discussed and challenged by many in the industry.So, will Bitcoin hit $100k by the end of 2021 or will it take longer?

Many analysts see it happening, and others see it surpassing the $100,000 mark.

One Bitcoin enthusiast who believes Bitcoin will hit the mark soon is Bloomberg’s senior commodity strategist, Mike McGlone. Just last month, he took into consideration Bitcoin’s growing adoption and declining active supply to predict it would hit the milestone by the end of 2021. Ad: 0:17 0:29  https://s.yimg.com/rx/vrm/builds/35327681/xdomain-vpaid.html?id=0Scroll back up to restore default view.

Another crypto expert who somewhat agrees is Jurrien Timmer, Fidelity’s director of Global Macro. In a recent interview with CNBC, Timmer said BTC’s USD value would have five zeros by 2023.

“I have a supply model and a demand model and the next and last time that those two models intersect is at around $100,000 in a couple of years,” Timmer said.

Yahoo Finance spoke exclusively to Voice, who said the Bitcoin $100k milestone was “now on the horizon”.

“It has been on a substantial increase over the last two years,” he said.

“This is reflective of the ever-increasing interest from individuals and larger businesses.

“Whilst Bitcoin – like all asset classes – rise and fall, realistically Bitcoin and other cryptocurrencies have had a very positive return on investment over the last 24 months.

“It’s extremely positive and is a signal that investors – individuals and businesses – continue to see cryptocurrencies as an attractive investment and asset class.” 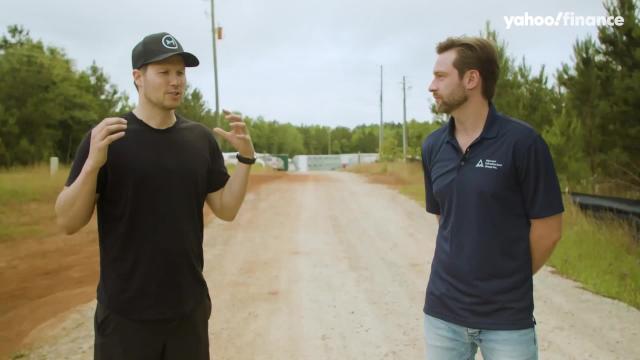 Whether or not Bitcoin reaches $100k this year, he expects it to happen “over the next few years”.

But can Bitcoin reach higher than that?

Cathie Wood – an American investor and the founder, CEO and CIO of investment management firm Ark Invest – predicted a huge increase in Bitcoin’s value over the next few years.

“I have seen two periods in my investment life where what seemed like new asset classes were moving into institutional portfolios,” Wood said at the CFA Societies of Australasia conference this month, as reported by the Australian Finaincial Review.

“Real estate in the ‘70s and ‘80s and emerging markets. If institutions around the world were to allocate 5 per cent of their portfolios to Bitcoin, that allocation alone – and this is just one of many use cases out there – would add roughly $500,000 to bitcoin’s price.”

Here’s what you need to know about Bitcoin in 2021.

She said that didn’t even take into account the “potential for large corporations like Square, MicroStrategy, and Tesla to allocate more of their balance sheet holdings to Bitcoin instead of cash”.

It’s not the first time Woods has made this forecast for Bitcoin’s price. She’s a veteran Bitcoin supporter and has long been an advocate of the crypto market’s incredible growth.

Bitcoin’s future remains to be seen, but it certainly looks bright.