The guilty plea of the founders of the crypto trading platform with main offices in Hong Kong and Singapore avoided a trial; bitcoin dropped below $37,500 on Sunday after Russian President Vladimir Putin placed his nuclear forces on alert.

Weekend Prices: Bitcoin and other cryptos fell significantly as the war in Ukraine escalated.

After largely holding their own through the early part of the weekend, bitcoin and other major cryptocurrencies plummeted on Sunday as the war in Ukraine intensified.

Satellite images showed columns of Russian troops heading toward the Ukraine capital, Kyiv. On Sunday, Russian President Vladimir Putin placed his nuclear forces on alert in response to sanctions and other measures that the U.S. and its Western European allies have taken to punish Russia and support Ukraine. Later in the day, Ukraine announced it had agreed to hold peace talks with Russia to end the invasion.

At the time of publication, bitcoin was trading under $37,800, down over 3%. Ether was changing hands at about $2,600, down over 5%. The second largest crypto by market cap started the weekend at over $2,700. Almost all major altcoins had dropped significantly. Terra’s luna and avalanche were off about 7% and 8.5%, respectively.

Joe DiPasquale, the CEO of fund manager BitBull Capital, said that bitcoin had returned to the same $37,000 support line it faced last Monday. But he added that only “a broader sell-off on risk-on assets,” stemming from larger economic pressures could keep bitcoin under $37,000 or force it much lower in the days ahead.

DiPasquale said that bitcoin’s pricing late Sunday was important for “setting the tone ahead.” “Because crypto trades 24/7, it is sometimes seen as an early indicator where equities markets may go on Monday’s opening.”

If bitcoin dips, he said that the next support line would appear at $35,000. But he also struck an optimistic note, saying that his firm has been “hearing that $35K has been a major buy-in point for larger buyers, including corporate treasuries this year.”

US Case Against BitMEX, Arthur Hayes Was International Overreach, but Now Its Merits Won’t Be Tested in Court

As the week ended in Asia, the long-running saga over BitMEX seemed to be concluding.

“As a result of its willful failure to implement [anti-money laundering] and [know-your-customer] programs, BitMEX was in effect a money laundering platform. For example, in May 2018, Hayes was notified of allegations that BitMEX was being used to launder the proceeds of a cryptocurrency hack,” the U.S. Department of Justice said in a press release Thursday.

The plea followed a $100 million settlement in August to resolve charges against the company (entirely separate from those against its executives) as the exchange’s new leadership – the original founders Arthur Hayes, Ben Delo, Samuel Reed and Gregory Dwyer had left the company – wanted to signal that this was a new chapter.

Remember: BitMEX is incorporated in the Seychelles, with its main offices in Hong Kong and Singapore. Hayes and Delo resided offshore.

But these settlements mean the prosecution’s case against BitMEX, and the separate one against Hayes and Delo, will never be tested in court. (Reed and Dwyer haven’t signaled their intent to settle.) Certainly, those accused of a crime have the right to enter a plea deal to settle their case; court proceedings are drawn out, stressful affairs. However, this agreement still means that the ambiguity around the case will endure and we’ll never know the strength of the DOJ’s argument.

Remember, BitMEX has never accepted fiat currency, unlike other exchanges. It only traded in bitcoin (BTC) until recently. Only in November it added tether (USDT) to the list of accepted crypto.

So if an institution doesn’t actually accept fiat currency or provide an off-ramp for it, can it be charged under the Bank Secrecy Act?

The case introduced a new area of jurisprudence for the BSA, Ross Feingold, a Taipei-based lawyer and political risk consultant, said during the case’s early days.

Feingold, who had formerly served as in-house counsel for Royal Bank of Scotland, Deutsche Bank and JPMorgan in Hong Kong, highlighted that this would have been a precedent-setting case for the BSA as it would have been one of the first uses of the Secrecy Act against a non-bank financial institution.

Prior to BitMEX, the Secrecy Act was used in 2018 against a firm called Central States Capital Markets, which had similar gaps in its KYC/AML regime like BitMEX. But that case ended with a deferred prosecution agreement where CSCM agreed to change its procedures in exchange for no charges.

Braden Perry, a former Commodity Futures Trading Commission enforcement attorney and now a partner at Kennyhertz Perry, said at the time that this was “dangerous territory for the CFTC.”

“The CFTC’s increasingly expanded view of their jurisdiction will likely be challenged, especially against offshore exchanges and participants that have limited ties to the United States,” he said at the time.

But all of this was never tested in court. Could the Bank Secrecy Act apply when the institution in question isn’t a bank and didn’t even deal with currency? Can the CFTC regulate a market that is based offshore and doesn’t specifically target U.S. residents? (While there were concerns over BitMEX’s leaky IP blocking regime, it also didn’t advertise.)

We won’t know how the court would rule as the case against BitMEX and the separate ones with Hayes and Delo have been settled. The prosecution’s evidence won’t be tested in the adversarial nature of a court proceeding. Some of these questions might be answered in the upcoming case involving the U.S. Securities and Exchange Commission and Terraform Labs.

Terraform Labs is claiming the agency did not have jurisdiction over CEO Do Kwon when he was served with a subpoena during a conference in New York because neither the company nor Kwon are U.S. residents. Terraform Labs’ lawyers are arguing that just because U.S. residents accessed the company’s services doesn’t mean there was “purposeful availment.” The lawyers cited prior case law (Royalty Network Inc. v. Dishant.com) that to claim that because a website is available in a market doesn’t mean that it’s a “purposeful attempt to take advantage of the … market.”

That Hayes, et al. didn’t have their day in court is a shame. Under intense scrutiny, the government’s case against them might not have been as strong as it seemed.

Yes, Hayes taunted U.S. authorities: The initial indictment quoted comments he made at the Tangle in Taipei saying that Seychellian authorities could be “bribed with coconuts” and equated dealing with New York regulators to forced sodomy.

Eventually, this part of the submission was blocked by a judge and rightfully so as anyone in the audience could see it was a joke directed towards New York University professor Nouriel Roubini, his cantankerous debate opponent onstage.

But the fact this comment was highlighted by prosecutors shows that it might be Hayes’ ego that bothered them. Having an ego is certainly no crime. 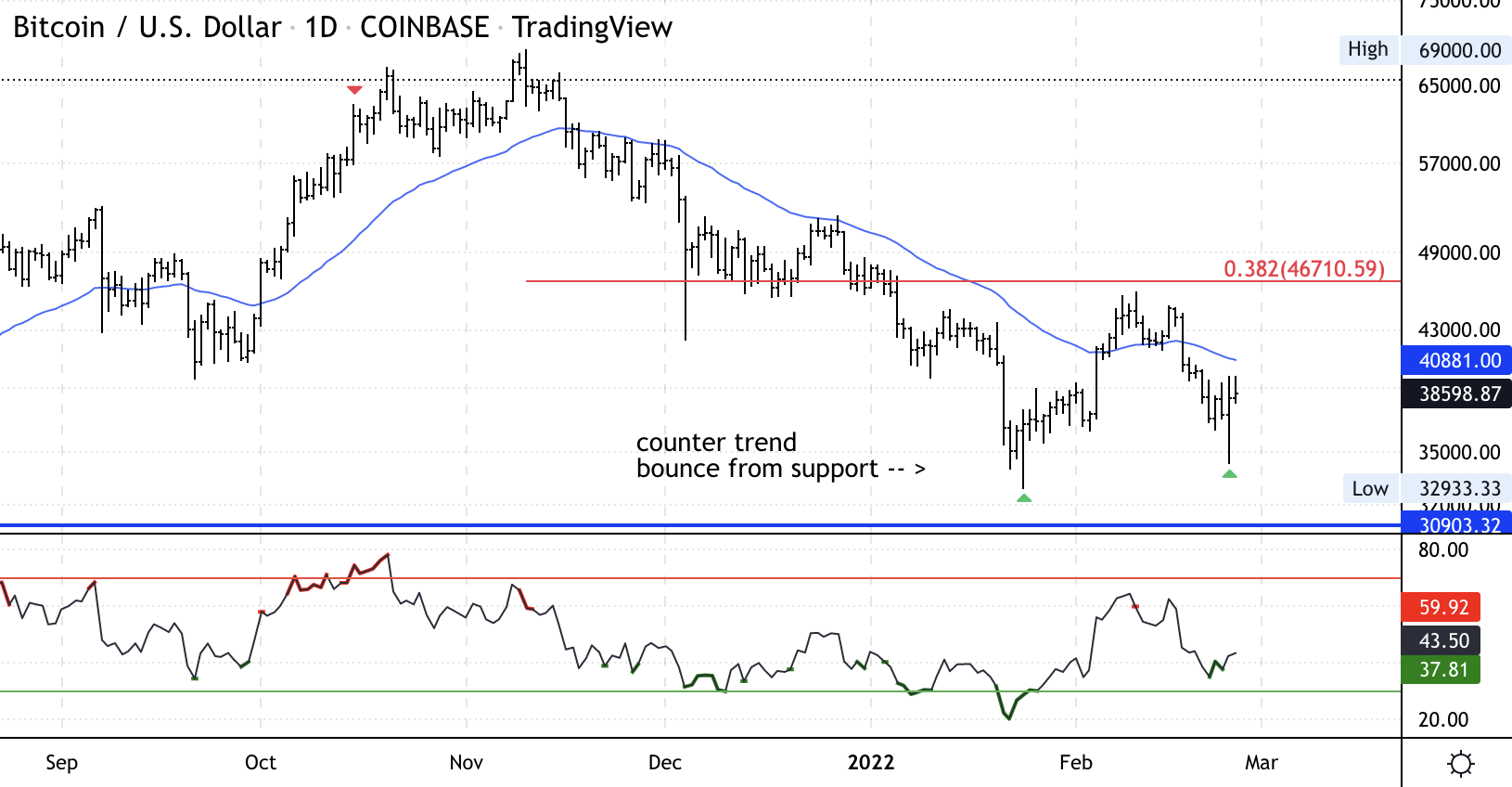 Bitcoin (BTC) experienced a sharp reversal on Thursday, and extended gains into Friday. For now, selling pressure has faded, which means buyers could remain active between the $30,000 and $46,000 range.

BTC returned above $38,000 and is up 6% over the past 24 hours. On Friday, the cryptocurrency was down 2% over the previous week, which meant the recent bounce had not shifted the short-term downtrend. On Sunday, bitcoin had dropped below $37,500 as the war in Ukraine intensified.

Thursday’s price action triggered initial downside exhaustion signals, per the DeMARK indicators, similar to what occurred on Jan. 24, which preceded a 30% upswing in price. Still, in bear markets, counter-trend signals can be brief or invalid depending on the status of long-term momentum readings. Currently, momentum remains negative on the weekly and monthly charts.

Immediate resistance is seen at $40,000, which could stall the current price bounce. There is stronger resistance at $46,700, which capped upside moves earlier this month.